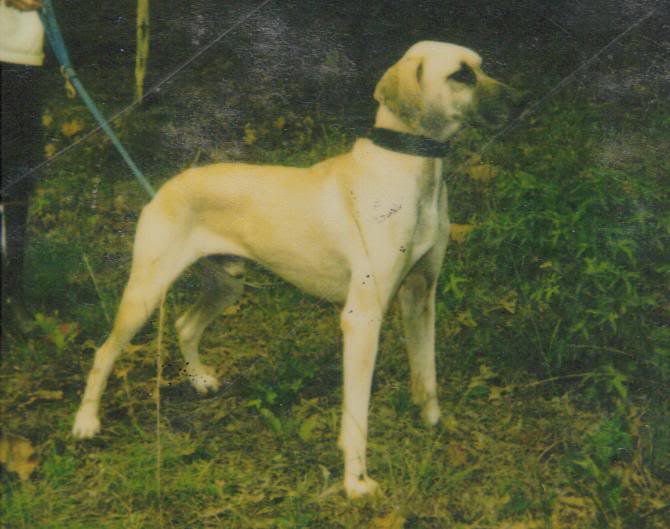 Dark yellow, heavy black mask and ears, although he had only half a left ear, bobtail, deep wide chest, very tight high flank, long legged, long body, real nice arch in his back. He was a very Exceptional Refined Conformation dog, nice medium bone, and muscle, extremely cat quick and agile, very light on his feet, phenomenal athlete and athletic abilities, fast take off and top end speed, easy break in speed and top speed, he could break in a half a heartbeat. One of the most outstanding cow dogs that ever worked, he worked almost identical to his sire, however Hunter had a front end style somewhat unlike any dog that had every come before. Extremely classy style, hard fast front end quarterback lead style, real physical, slashing, hard control and finesse that was amazing, the ranker rougher the cattle the more physical he worked and the harder he would quarterback, extreme nasty working control. If a cow broke the set they wore Hunter as fast as he could hit, Extremely Hard, Fast Catch Dog, RIGHT NOW, mostly a nose dog, extreme heavy windmill, a tornado when he hit, deep hard, wide hunt, cold nose , he turned a 16 to 18 hour old cow or hog track fast. Hard, heavy, deep wind dog, easy handling, hard bottom, no quit anywhere. Hunter had a very large presence about him, very dominate, he handled cattle fast , hard, and was always in the right place at the right time, every time, he read cattle outstanding.

On hogs Hunter was a rough chainsaw bay dog, when catch dogs hit the would catch, but with a ôHunter Get Aheadö he would roll and relay hard, He always stopped a running hog from the nose, with a lighting slash he shut down the baddest of the bad, and never got a scratch. He would give a hog a couple of feet on bay, always sweeping hard and fast, hard hammer bay, complete control dog. Just playing, in reality, in the Registry Hog Bays, Wrights Curs decided to work Hunter. The first bay he was entered into he lost the first class, coming in third, from then on he never lost a bay quickly becoming the youngest dog to ever earn the World Champion Title. Hunter put on jaw dropping performances, his control and front end style were unlike any dog ever seen in one of our events, very amazing, full intense focus, complete in every ability and he bayed the same in the woods.

Wrightĺs Bounty Hunter, with all his amazing and outstanding abilities, and World Championship, will be remembered for making his living working & catching rank bad cattle, as a Producer he was Exceptionally Potent .. He produced 19 litters, EVERY Pup worked for the purpose they were kept or bought making well above average, most outstanding in their field, line breeding his sire and himself. It didnĺt take high percentages of his blood to maintain his physical, athletic, and working traits, and his working style always dominated his pups and grand pups, unlike any other. Wrightĺs Bounty Hunter was inducted in the Hall of Fame in 2003, the Nationĺs All time #2 Leading Stud Dog as he remains today. Randy commented when Hunter was inducted into the Hall of Fane, ôHe was my favorite son of Ben, perhaps the most outstanding in everyway, and the only one I ever felt that could have replaced his sire as the Nationĺs Top Producer, if he had lived as long as his sire Hunter was the most outstanding & complete cow dog IĹve ever seen as well as the Most Prepotent, Dominate Producing Stud Dog I've ever seen or owned.ö. Donald Cain ~ 03ĺ.